Last Friday night (July 4), Anna and I were car camping at Lake Sherwood in the Monongahela National Forest deep in the mountains of West Virginia. Exactly one week later, we were in a nice hotel room looking down upon the throngs of people in Times Square. What a difference a week can make! 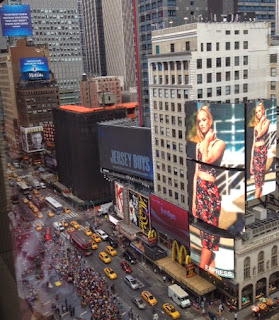 This past weekend we took another chartered bus trip to New York City with Arts & Culture Tours. Lisa Starcher Collins does a good job of organizing weekend bus trips from Parkersburg to Times Square. You can read about a couple of my previous trips at this blog post and at this first story (which also explains the "Und Brodvay" term I use for my NYC trip stories).

The primary purpose of this trip was to take Anna’s teenage niece for her first visit to New York City. She lives in a rural area of the state, but had previously visited Pittsburgh, Columbus, and Washington with us. However, New York City is unlike any other city, and so we thought it would be good for her to see just how big it is. The “Big Apple” is in a class unto itself.

Anna and I enjoy walking in New York—we feel it helps you get the full effect of this unique environment. After checking into the hotel, the three of us walked up Broadway, past the Ed Sullivan Theater where David Letterman hosts “The Late Show,” to Columbus Circle. We skirted across the lower part of Central Park before stopping to watch an impromptu break-dancing exhibition (that was very impressive) at the General Sherman statue on the south-east corner of Central Park.

Then we headed down stylish 5th Avenue, with a fun stop at the famous FAO Schwarz toy store. We toured St. Patrick's Cathedral, although the scaffolding for the renovation work there made it less astounding than usual. We walked further south, to the New York Public Library, and then diverted over to see Grand Central Station. Back on 5th Avenue, we went down to the Empire State Building. After our visit there, we walked over to the original Macy's Department Store and then up Broadway back to our hotel at Times Square.

Anna and I typically make that long walk hitting the midtown highlights whenever we arrive in town, to acclimate ourselves to the sights and sounds of the big city. We had warned her niece to be sure to wear good walking shoes, because we get our exercise when we are in town. Since it was near afternoon rush hour on a Friday, there were lots of people on the streets (and especially in Grand Central Station). With many pedestrians in a hurry to get home for the weekend, it gave her a sense of the energy in this city. The sidewalks were full of people! I speculated to her niece that she would likely see more human faces this weekend than she will see all year back at home.

We ate dinner at John's Pizza on 44th Street, so that we could say we had a New York pizza. Then it was getting dark, so we were off to explore the Rockefeller Center/Radio City Music Hall area, before our appointed time for the Top of the Rock (the observation deck at the top of the highest building at Rockefeller Center). It was amazing to see the city lit up below us at night! We finished by taking in all the neon and LCD lights within Times Square before retiring to our hotel room. 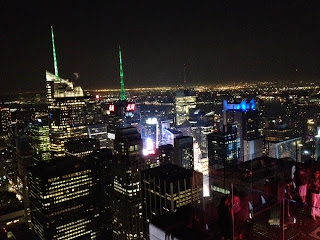 Saturday was spent getting on and off a guided tour bus which took us to see many of the important sites around the town. Much of the tour was familiar to us, but it was a good introduction for Anna’s niece. We did get to explore parts of Central Park today that we had never been to before, but that we recognized from movies and television. Our tour guide was a former actor who did a really good job of telling stories about life in the city.

We ate lunch at Guy Fieri's restaurant (from the TV show “Diners, Drive-ins, and Dives”). We also saw our only celebrity sighting--Bernadette Peters, who was nearby doing a promotion for the local animal shelter.

Late in the afternoon, we changed into nicer clothing for dinner and a Broadway show. We walked over to the Hell's Kitchen area and had a nice Cajun dinner at The Delta Grill. Then we headed to the theater to see the Broadway show "Wicked." Anna had wanted to see this show (a “prequel” for “The Wizard of Oz”) for years, but normally we just see shows that have half-price tickets available from the TKTS ticket booth at Times Square. Wicked is so popular, their tickets are never offered for half-price. Since this was a special trip for the three of us, I previously ordered advance tickets and gave them to Anna for her birthday recently.

I had heard a lot of hype about Wicked, but didn’t know quite what to expect. In fact, I didn’t have high expectations for it—assuming it was overrated. However, I must admit that I left the theater with a better understanding of the high reputation this show has achieved. I liked it better than I thought I would, because it was very well done.

Our final day included a NYC taxi ride to take the Staten Island Ferry, a visit to the impressive 9/11 Memorial, a walk from the southern tip of Manhattan, through the financial district, past the Brooklyn Bridge, and into Chinatown for lunch. Also this day, we checked out the subway, took the Radio City Music Hall tour (which included meeting a Rockette), and visited some last minute tourist stops such as LegoWorld, the Cake Boss Cafe, the Disney Store, the NBC store, etc. It was a very busy day to end a big weekend in the Big Apple. 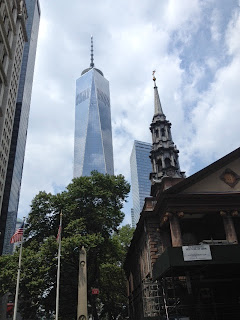 Our bus left the hotel around 5:30 and we were back home in about nine hours. It was a whirlwind tour, but I think we accomplished what we set out to do. Besides having a good time for ourselves, we wanted to take a teenager from rural West Virginia to our nation’s biggest city. We weren’t promoting New York as the ultimate place to live, but we wanted her to see for herself what the big city is like. We wanted her to have confidence in an environment completely different than West Virginia, but we also wanted her to be able to appreciate West Virginia even more. Hopefully, she will have the same “nice place to visit, but I wouldn’t want to live there” attitude that Anna and I have. Regardless of where life takes her, we hope she will always remember her first trip to the Big Apple.