The statue “Lincoln Walks at Midnight” (sculpted by Fred Martin Torrey from Fairmont) prominently adorns the front of the West Virginia State Capitol, which I visited recently. However, many West Virginians don’t realize the historical significance of this eloquent work of art. It speaks to the quandary in which Lincoln found himself with regard to the creation of the new state of West Virginia. He had to deal with our complicated statehood issue on top of dealing with the Civil War. It’s no wonder he had trouble sleeping! For many years, western Virginians were taken advantage of by their eastern counterparts. There were major cultural differences between the established planter society in the flatlands, versus those who had settled in the rugged mountains. We sent our taxes to Richmond, but saw very little in return (except for the lunatic asylum).

The Civil War’s underlying issue was slavery, but it was also about whether the southern states should be allowed to secede from the United States. The western counties dissatisfaction with Richmond came to a head when the Virginia Legislature chose to join the Confederacy. Seizing their opportunity to split from Virginia, the western counties first established a “Restored Government of Virginia” with Wheeling as its capital. The federal government recognized this loyalist faction as the legitimate successor to Virginia, as opposed to the other government of Virginia, which now cast its lot with the rebels.

Article IV, Section 3 of the Constitution states "...no new states shall be formed or erected within the jurisdiction of any other state...without the consent of the legislatures of the states concerned as well as of the Congress." In order to form a separate new state, the “Restored Government of Virginia” voted to allow West Virginia to be formed from its northwestern counties. The wartime Congress was quick to grant its consent as well, sending a statehood bill for President Lincoln to sign in December 1862.

So this meant that Lincoln, who (after the Confederates attacked and captured Fort Sumter) had authorized the military to put down the rebellion and refused to recognize a state’s ability to secede from the Union, was now faced with a request for statehood from a portion of an existing state. While those pushing for a new state of West Virginia claimed to have garnered the necessary Constitutional “consent” from the existing state’s legislature, the truth was that the “Restored Government of Virginia” controlled less than half the area bounded by the original Virginia state borders. Lincoln was put in the position of approving our “secession” from Virginia, while telling Virginia (and other southern states) that they weren’t allowed to secede from the Union.

The strife and division caused by the Civil War made it possible—indeed, preferable—to allow West Virginia to become its own state, but it was “a bit messy” from a legal viewpoint. Fortunately, we have survived for nearly 152 years now. West Virginians should all be grateful that while Lincoln contemplated our fate during the cold December evenings, he ended up approving our birth. 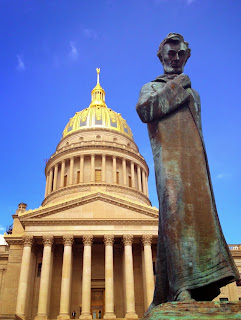 [This story appeared in the April issue of “Two-Lane Livin’” magazine.]

Posted by WVrambler at 9:17 PM No comments: