One of the few West Virginia State Parks I had not visited was Twin Falls in Wyoming County, but I recently was able to cross it off my list. Upon arrival, the first thing we did was check into our room at the lodge, and then headed back out for a hike to the Twin Falls. There is an easy trail that leads to both of them—they are about a mile apart on two separate creeks in the Guyandotte River watershed. 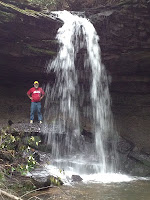 Of the two falls, the first one on Marsh Fork Creek is nice, but not as impressive as the one on Black Fork Creek. The second one is bigger, with a sizeable overhang. I was even able to hike my way around its pool and view the falls from behind.

We were fortunate that both creeks were running full and clear—I understand that during dry periods in the summer, they may be reduced to a trickle. After passing the first falls, if you look down the hill you can see the remnants of a stone foundation where a mill built in 1882 once stood. 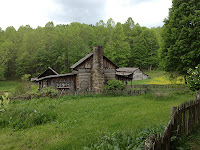 Another attraction within Twin Falls is the pioneer homestead farm. Its log cabin and outbuildings are much the same as they would have been a hundred years ago. However, the cabin serves as the home of one of the park employees, so it isn’t open for tours.

While we were in the area, we decided to make a loop through some nearby towns. We first drove a bit south to Pineville, the county seat of Wyoming County. The county courthouse there is architecturally interesting. 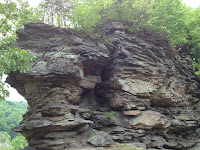 However, I enjoyed checking out a natural rock formation called “Castle Rock” (which is much bigger than the Castle Rock in North Bend State Park). There are steps leading part way up Castle Rock, which allow visitors to walk all the way around it, providing some beautiful views of the adjacent Guyandotte River as well as the town and courthouse.

We then hit Route 16 to drive through the town of Mullens, before heading to Sophia (Robert Byrd’s hometown). Just south of Sophia is a newly developed outdoor recreation area called “Burning Rock.” It is primarily used by those with ATVs and dirt bikes who are exploring the extensive Hatfields & McCoys trail network that covers much of southern West Virginia (indeed, it seems these off-road trails are quite popular and are helping local tourism). Burning Rock also has a twin zipline that is nearly half a mile long. I couldn’t convince Anna to “drag race” with me on the ziplines, but I did it by myself. It was fun to try it out once (unless I am there to try their “after dark” hours someday—that would be different!), however, I think I like the multiple zips that you get with canopy tours through the trees better.

It was an enjoyable overnight visit to this part of southern West Virginia. I must admit that like some of our other state parks, Twin Falls is sadly showing its age. We were originally given a room in the old section of the lodge, but it had water problems so we were moved to the new section, which was much nicer. When it was first built, this park must have been a showplace, but it now could use some maintenance work. It is a shame that our parks were not “gussied up” to celebrate West Virginia’s 150th birthday.

As we left Twin Falls, we decided to follow a small road that isn’t touted as an exit, but if you have experience driving on twisty mountain roads, taking Poke Hollow Road provides a shortcut if you are headed north as we were. I’m glad I finally visited, but it may be a “one and done” trip, especially since I am not a golfer (which seems to be a primary emphasis there).

Posted by WVrambler at 10:35 PM No comments:

As a young child in the 1960s, our family vacations to Virginia Beach involved taking Route 60 across the mountains. Following the Kanawha River upstream to its start where the Gauley and the New River meet was always fun, but past the Kanawha Falls/Gauley Bridge/Cathedral Falls area, one begins an incredible climb up Gauley Mountain. Before the four-lane highways were built, roads like Route 60 carried lots of traffic, including lots of long haul truckers, which made Gauley Mountain even more of an ordeal for drivers. The road’s twists and turns that take you from river level to mountaintop level sometimes were enough to sometimes make me car sick (I didn’t know back then how much I would love those same twists and turns as an adult riding a motorcycle).

Even as a child, I knew this New River Gorge area as one of the most interesting regions in the beautiful state of West Virginia. We sometimes would stop at the Hawks Nest Overlook to let everyone take a break (including the car). Another “milestone” along that route was the Mystery Hole. This gift shop/gravitational oddity is an interesting example of roadside Americana which is still in business today, much the same as when I was a kid. We also veered off to see Babcock State Park (with its iconic grist mill) a time or two as we passed nearby, before Route 60 eventually leads downhill to Rainelle and then historic Lewisburg.

Fast forward to today, and the Fayette County area is a leading tourist attraction, with many opportunities for outdoor adventures, whether it is rafting, rock climbing, mountain biking, hiking, ziplining, etc. This year, the Boy Scouts will hold their first national Jamboree at their new camp in the New River Gorge area, exposing thousands of scouts from across the nation to the wonders of West Virginia.

I’ve been fortunate to take advantage of this region’s various activities over the years. One of the more “exotic” adventures I tried was a flight over the New River Gorge in a Stearman bi-plane. Wild Blue Adventures has a small grass airstrip just behind the Shell Station along Route 19 between Fayetteville and Oak Hill. One Sunday afternoon before heading home and back to work, I decided the time was right to give this a try.

The pilot was very nice, and set me up with a leather helmet complete with earphones and a mike so we could communicate. After a brief explanation of the cockpit, the engine started and he taxied to the grass runway. As we took off over the Wal-Mart/Lowes shopping center, I was surprised to see on the opposite side of Route 19 an extensive housing development (it must be rather affluent, based on the number of backyard pools which were visible).

Soon we were flying over Fayetteville and then the New River Gorge. Seeing the bridge from several hundred feet up in the sky was an unforgettable experience. So many things look a bit different from that aerial perspective. As a result, I gained a new understanding of how some of the roads and ridges in the area tie together.

Before long, my time in the bi-plane came to an end. The pilot skillfully brought us back for a landing on the grass runway and taxied to a stop. I exited the airplane with a familiar feeling from my childhood—just a trace of queasy stomach, but still astounded about the wonderful Fayette County sights I had witnessed. 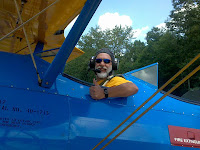 Posted by WVrambler at 6:39 PM No comments: