In 2013, West Virginia is celebrating our 150th year of statehood—and “independence” from Virginia. The original state boundary of Virginia stretched all the way to the Ohio River. However, the vast majority of the Old Dominion population lived in the flatter eastern part of the state which had been settled first. For the most part, the citizens there looked down on the western counties as less civilized. Heck, those “primitive” western Virginians had even elected frontiersman Daniel Boone (who lived near Charleston at that time) to the fancy halls of the Virginia legislature!

Our needs were much different than those in the rest of the state, and those in power mostly ignored us. They apparently were happy to have our tax revenue, but we never seemed to get much of it back. The major expenditure made by the state of Virginia within our current boundaries was the Trans-Allegheny Lunatic Asylum at Weston (an interesting place to visit).

One big difference between western and eastern Virginia was slavery. The mountainous terrain of the western counties was not conducive to large scale farming of tobacco, cotton, etc. Thus, we never had a large slave population compared to the rest of Virginia and other southern states. Plus, most of us were too poor to own slaves.

When the Civil War came along, most in western Virginia saw no need to secede from the country we loved. If the leaders in Richmond were going to join the Confederacy, then this was our chance to go our own way. Our independent streak was strong! Thus, western counties refused to join the Confederacy and instead set themselves up as the reconstituted state of Virginia in Wheeling (at what is now a nice museum called Independence Hall). This allowed us, as the loyal Virginians, to have a government with representation in Washington.

What many of us in the western counties really wanted was to become our own state, rather than serving as a “shadow government” of our former state. We knew that we had not been treated fairly by the eastern Virginians who had always looked down on us. This seemed like our chance to free ourselves from their longstanding mistreatment. Otherwise, after the war ended, we might once again be taken advantage of by Richmond.

The decision to grant us statehood was not without controversy. In fact, some referred to West Virginia as the bastard state, because of our “illegitimate birth” during the Civil War. As Reconstruction began and the former Confederate states rejoined the United States, a special condition was added for Virginia—that they had to accept our creation as a separate state and not challenge the constitutionality of the process. But the politicians in Richmond still went after us.

The U.S. Supreme Court ruled in Virginia’s favor, but allowed us to set up a payment schedule, because we couldn't afford to pay it all at once. However, it still made it rough on the growth and prosperity of our little state. Most of us have forgotten this injustice, but at the time, Mountain State folks were very aware of and upset about these debt payments to Virginia. There was a big celebration when the last payment was made in 1939.

Unlike the Dakotas or the Carolinas (both equally balanced between north and south), there is no symmetry with the Virginias. We are sometimes seen as a sub-component of another state. It really irks us when we tell people we are from West Virginia and they reply with “Oh yeah, I drove through Roanoke once”—oblivious to the fact that West Virginia is a separate state, and not a region of Virginia.

West Virginians have a sense of being disrespected—we tend to carry a chip on our shoulders. We know what it is like to be that red-headed stepchild, with a constant need to prove our worth. Others may look down on us, but we are strong, we are independent, we are beautiful, and we are valuable. West Virginia is not the bastard state—we are the Mountain State, known as “Wild & Wonderful West Virginia.” We are the 35th star on Old Glory, and it is indeed, almost heaven. 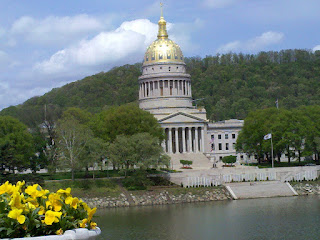 A view of our state capitol, taken from across the Kanawha River on the campus of the University of Charleston (my alma mater).
Posted by WVrambler at 12:52 PM