My Take on Taxes

As the April 15 tax deadline day looms a week away, many people are grumbling about paying taxes. Maybe I’m weird, but I look at paying taxes in a similar fashion to the way I look at voting—it is one of the rites of citizenship, and I’m proud to support my country. There are things I’d like to change about the way our government (on all levels) spends money, but you won’t hear me grumbling about the need to pay taxes. It makes more sense to grumble at the elected decision-makers than at the tax collectors.

When I was teaching Constitutional Law, I always made sure my students learned that Americans wanted an income tax. The 16th Amendment was approved over a century ago after the Supreme Court initially overturned a federal tax on incomes over $4,000 (about $110,000 in today’s dollars). The original idea was that those who were prospering in our country should help pay for our country.

In today’s world, there are new problems related to paying taxes. A friend of mine in Ohio recently submitted his state income tax electronically, only to be informed that someone had already filed a tax return in his name and claimed the refund. The state tax department required him to answer a series of questions intended to confirm that he was the real person. Unfortunately, these personal knowledge questions—old addresses, mortgage payment amounts, previous cars, credit card accounts, and others—are not always easy to answer.

Because of the rising number of tax returns submitted by identity thieves, tax departments are using the identity quiz questions developed by the major credit bureaus. If you have ever attempted to get your Congressionally-mandated free copy of your credit report (which I highly recommend, and which can be obtained by visiting www.annualcreditreport.com), then you’ve probably had to answer the same type of questions to confirm your identity. Sometimes they involve facts that many of us did not think we would need to retain. Failure to correctly answer those required by the tax department might result in the need for you to fill out additional forms, and perhaps even make a trip to the local tax office to verify your identity in person.

My tax strategy in recent years has been to fill out my tax form myself on paper—the old fashioned way. Then I take the hard-copy forms (along with a photo ID) to the local IRS office, where a courteous employee reviews my return, confirms its accuracy, and (with a quick inquiry on her computer) assures me that no identity thief has yet tried to use my name to file for a tax refund. If by chance a tax thief had already done so, I would be able to immediately prove my identity and begin the process to correct the situation. Then I walk up the street to the West Virginia Tax Department office and go through the same process. I’ve never had to wait very long and my dealings with the tax employees have always been pleasant.

I enjoy bucking the trend towards electronic tax submissions and instead dealing face-to-face with a real person! They even provide me with free photocopies of my submitted tax forms! Plus, I didn’t need to pay for postage stamps and worry about the delivery (or worry about hackers breaking into my home PC and perusing any tax software for identity theft purposes).

Another identity theft precaution that people should take is to register with the IRS—as well as Social Security—for their personal online accounts, before any identity thieves try to establish themselves as you. I was able to establish my IRS account by going to http://www.irs.gov/Individuals/Get-Transcript and following the directions. Similarly, I set up my free online Social Security account at http://www.ssa.gov/myaccount/. Note that it is essential to create very strong passwords for these important accounts!

I learned about these precautionary actions because I pay attention to computer security issues. There are many good websites providing identity theft advice, but if I had to pick just one, I’d recommend the blog of former Washington Post reporter Brian Krebs. Check out this recent example related to this topic-- https://krebsonsecurity.com/2015/03/sign-up-at-irs-gov-before-crooks-do-it-for-you/.

Of course, if I somehow became the U.S. President, I have a solution to this identity theft problem—which would also benefit one of our country’s other problems. I would wait until after April 15 before sending any tax refund checks. This would stop tax identity thieves because they always try to submit their fake returns early, before the real person submits their actual forms. If more than one return is filed for the same name, then the IRS could investigate prior to sending a check. It would also encourage everyone to submit their tax returns before the April 15 deadline. Plus, the U.S. budget deficit could be reduced slightly because of the additional interest that would be earned by not immediately sending back tax refunds (not to mention saving the money now lost to identity thieves).

Some folks would grumble because they wouldn’t get their money back as quickly as they did before. However, one thing I have learned during my stint as an elected politician is that it is impossible to make everybody happy, and that sometimes you just have to get accustomed to the inevitable grumbling.

I wish you a happy tax deadline day and many happy returns! 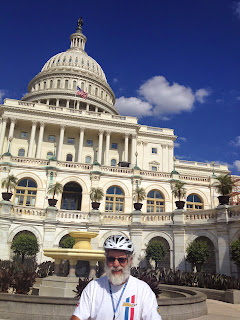 This is a picture of me riding a two-wheeled Segway in front of the U.S. Capitol a few years back. It is more interesting than a picture of me doing my taxes.
Posted by WVrambler at 9:06 PM