I grew up going to races at Pennsboro Speedway in the late ‘60s and into the ‘70s. It was always a magical place for me as a kid, sitting in that old wooden covered grandstand near the first turn. We went to other tracks as well, but this was my favorite, with two bridges (and a large culvert bringing another stream to join the main one in the infield) as well as an asymmetrical design (turns one and two had a much longer radius, while turns three and four were much tighter). It had served as the Ritchie County Fairgrounds and was originally built in the late 1880s for racing horses, but evolved into a track for man-made horsepower. It was a tricky track, demanding the best out of drivers and machinery.

Unlike other speedways with lights that could run at night, the big old half mile at Pennsboro ran on Sunday afternoons. While this may seem as a limitation to some, it ended up allowing Pennsboro to draw a wide range of cars, beyond just the normal West Virginia/Eastern Ohio/Western Pennsylvania region. They could run their home tracks on the weekend evenings, and then haul to Pennsboro to end the weekend.

I got to see Butch Hartman and Don Gregory race there before they made it big in USAC and ASA respectively. As the word spread about Pennsboro, more fans and more cars came from further distances. I remember when the cars from Michigan started coming down—drivers such as Ray Nece, Marv Parenteau, and Erv Baumgarten.

I’ve seen lots of great races at this track, and most people would most likely pick one of the Hillbilly Hundreds (my favorite was when Dorus Wisecarver won in his ’67 Plymouth) or the Dirt Track World Championships (probably Jim Dunn’s upset win) as their favorites (or maybe even the ARCA race that was held there, which rates high on my list). However, probably my favorite Pennsboro race was the Spirit of ’76 race (a 76 lap feature in conjunction with the Fourth of July holiday) back in 1979.

By this time, I was old enough for a pit pass, and brought my pocket instamatic camera with me (hence the accompanying pictures). After many years of drivers from outside the state winning the big races, Charleston’s Gene McNeely had won the Hillbilly Hundred the previous Labor Day, and his yellow Camaro with the orange chiseled #20 on its sides was a favorite to win the July 4th special race. As I recall (and I don’t claim to have a perfect memory, but it makes the story better), this native West Virginian set fast time and sat on the pole, leading the early stages of the race that day.

Gene McNeely driving fast out of turn four that day.

This race was memorable to me because it brought in a new challenger from a new region. Most out-of-staters came from the north or the midwest, but this one was different. The long awaited Interstate 77 had finally been completed into North Carolina, which was enabling many West Virginians to head south looking for jobs, as our state’s economy weakened.

However, I-77 goes both ways, and on this day it brought a white Camaro with blue and red trim northward, all the way from Kings Mountain, North Carolina. Besides the double zeroes emblazoned on the doors, it had sponsorship from “Petty’s of Spartanburg.” We knew that Richard Petty was from North Carolina and probably wasn’t connected, but just to have “The King’s” name on the side was pretty cool. It turns out that this new guy was named Freddy Smith. We didn’t know it at the time, but this was a name we would get to know well over the coming years. 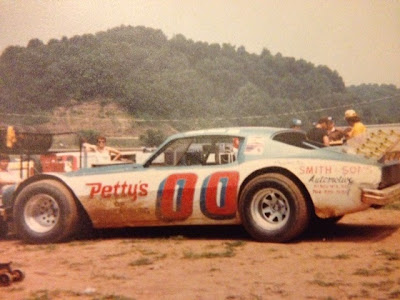 Besides the "Petty's of Spartanburg," if you look close you can read "Smith & Sons Automotive, Kings Mtn. NC" on the rear quarterpanel. Also note the 10 feature win stickers on the plexiglass support for the rear spoiler.

I remember thinking “Surely a guy who has never seen this speedway ever before can’t come into this oddball track and knock off the homestate favorite!” Although he was a rookie at this track, Freddy Smith wasn’t a rookie racer—he was a heckuva driver, and indeed he passed Gene McNeely. I thought the homestate hero might get back around him before it was over, but it didn’t happen. Despite never having been to the track before, Freddy Smith went on to win the Spirit of ’76 race—the first of many checkered flags he earned at Pennsboro.

He was the first of many racers who came up I-77 from the south, as transportation links improved and Pennsboro's reputation grew. However, I’m not sure there has been any other driver from anywhere else who came into Pennsboro for the first time and beat the established veterans there. It was a great race—one of many I was able to enjoy as a spectator at this historic speedway.

Posted by WVrambler at 2:43 PM