I enjoy the incredibly unique sensation of flying through the air on a zipline. This past weekend I got the chance to try a new zipline adventure. I’ve zipped before at Hocking Hills, the Treetops Canopy Tour at the New River Gorge, the WVU zipline near Coopers Rocks, the Wild Safari zipline above The Wilds in eastern Ohio, and the long double zipline at Burning Rock. This past Saturday I tried out the Gravity zipline tour in Fayette County, West Virginia. It is truly a high flying adventure!

This is owned by the same company (Adventures on the Gorge) that runs the TreeTops Canopy Tour near the New River Gorge Bridge. I’ve done the TreeTops tour twice, which zig-zags through an old hemlock forest along Mill Creek. This canopy tour is very well designed, with an emphasis on the natural surroundings through which you are flying. It is also very educational and I highly recommend it.

The Gravity zipline tour (which requires a short bus trip from their headquarters near the gorge area to a reclaimed strip mine area on the north side of Route 60) puts a much greater emphasis on speed. Instead of shorter runs through the canopy, most of the Gravity lines are long and above the treetops (as much as 200 feet high), giving you a spectacular “big picture” view of the surroundings. Indeed, the guide pointed out that from the mountaintop where the course was built, you can even see Nicholas County to the north and Raleigh County towards the south.

Gravity starts with a couple of tame runs near the top to let you get acclimated. Then you start on three longer, higher, faster zips that criss-cross the bowl of this hillside. Unlike most other ziplines I have done, there is not much need for braking—they take care of that for you. In fact, the bigger problem for a few of the “lightweights” in our group was having enough speed and momentum to make it to the end of the line (with my weight, I had plenty of momentum). 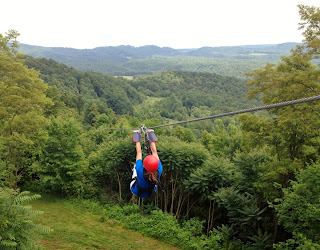 [Notice the long-distance views and the beautiful scenery.]

After the first five zips, you board a bus again to take you back up to the top of the hill for the “grand finale.” The sixth and final zip is over 3000 feet long, and has its own nickname—the Adrena-Line. They claim that you reach speeds of 50-60 MPH! The single zipline at Burning Rock was a half-mile long and at one time was the longest in the state, but Adrena-Line beats it with hundreds of feet to spare. Like Burning Rock, Adrena-Line is actually two identical ziplines spaced about ten feet apart. This allows you to “drag race” a friend—an experience I had not done. I had zipped by myself at Burning Rock, but this time I had a friend along with me.

We knew that since I weighed more, I would beat her to the finish line (it seems the more weight, the more momentum on these zips, as long as you keep yourself as aerodynamic as possible). However, it wasn’t about who would win, it was more about the unusual experience of doing a zip with someone else at the same time. I wasn’t sure what to expect, but I was looking across the valley at where the two long cables converged in the distance, and realized this was going to be a long, fast, and memorable ride. 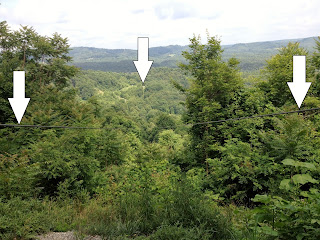 [The arrow in the middle is the landing zone, where the two parallel cables end. The arrows on the left and right side are showing the cables near their starting point. I took this picture standing at the start looking across to the end of the "Adrena-Line" before we flew across.]

I got beat off the start, and so she took the early lead. That actually worked out well, because I really enjoyed the amazing view of watching her fly through the sky—with the green forest below us as a background—from a vantage point only a bird could appreciate. Slowly, I gained ground on her, until about halfway down the course. I was able to yell “Bye Bye!” to her as I took the lead. This allowed her to also enjoy the unusual perspective of seeing someone else flying through the air during the second half of our flight.

I’ll never forget that amazing sight of flying through the air with her! But even though that was the last zipline, the enjoyment wasn’t over yet—we still had fun joking around with the tour guides and bus driver as we returned all our gear and hopped on the bus for the ride back to their headquarters. Just like most of the rafting guides I’ve had over the years, our two guides plus the bus driver were very personable and full of jokes and funny comments (in addition to their primary job of being concerned with our safety).

I’d like to add one final comment about this adventure. This was a spur of the moment decision—unlike my usual recreational activities, I had not made any reservations in advance. We realized we had the time, so we just “dropped by” Adventures on the Gorge headquarters to see what we might do with no advance warning. The good people who work there mentioned a few options, and soon we were last minute additions to the 1:30 Gravity ziplining group. So if you find yourself in the New River Gorge area with time on your hands, feel free to stop by any of the outfitters to see what they might be able to do for you. Reservations are not required. 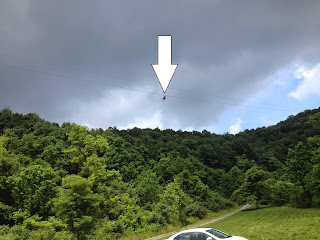 [This picture was taken from the "base camp" at Gravity, and the arrow shows a person from another group ziplining on one of the long runs prior to the Adrena-Line. The starting and finishing points of this zipline are both way out of the frame of the picture. Hopefully this gives a "sense of scale" about just how long and high these ziplines really are. If you want more info, check out http://www.newrivergorgecanopytour.com/site/gravity-zip-lines.html.]
Posted by WVrambler at 9:28 AM