West Virginia has suffered more than its share of coal mine tragedies. Recent years have brought us the sadness and drama of the Upper Big Branch and Sago mine disasters. Others might recall the 78 men who perished at Farmington in 1968.

Unfortunately, there were many other disasters in our history as well--perhaps the best known being the Monongah explosion on December 6, 1907. I can remember that exact date because I visited the Monongah cemetery in Marion County and saw the oddity of many markers repeating the exact same date of death. Although it was the largest disaster with nearly 400 casualties, few folks know about it today.

We’ve had several other mine tragedies that claimed triple-digit casualties, including Benwood (Marshall County), Eccles (Raleigh County), and Layland (Fayette County). Countless other deadly accidents have taken many other men and yet most have been forgotten. However, one community in southern Monongalia County is working to honor the memory of the Everettville mine disaster victims.

On April 30, 1927, an explosion ripped through the Federal #3 mine at Everettville, killing at least 91 men (some researchers say the total should be 111). It had such ferocity that the explosion blew out from the entrance portal in the side of the hill and destroyed the adjoining tipple, killing another half a dozen workers who weren’t even underground at the time. A few of the miners were trapped underground, but were able to survive for a few hours. They had time to write notes to their loved ones, which were found when the bodies were recovered.

Too often history gets forgotten as those who lived through it pass away. One determined woman who lived in Everettville had not been aware of the mine disaster, but upon finding out felt compelled to memorialize the victims. Carol Thorn organized a group and they formed a non-profit, set up a website, sought donations (including the land from the coal company), and reached out to nearby West Virginia University. History students helped to research the story, and landscape architect majors worked on designs for a memorial and a park at the mine site. A West Virginia historical roadsign has also been placed along nearby Route 19.

A songwriter from Morgantown created a special song for the project. It was based on one of the actual letters written by a miner who had survived the initial blast but was trapped underground. Henry Russell wrote to his wife using only a piece of coal and the remnants of an empty paper bag for cement. The song is a hauntingly beautiful story of a dying man’s last thoughts.

We had the honor to attend the memorial service on a beautiful spring day this past weekend, marking 87 years since this tragedy occurred. The fancy black granite memorial includes the names of 149 men who died over all the years this mine operated, not just the 111 names from 1927. In addition to various speakers, a folk music trio performed the Henry Russell song. The whole ceremony was a fitting tribute to the memories of these fallen miners.

We didn’t know any of the victims and had never been to Everettville. Our only tie was that we love our native state of West Virginia and happened to be in Morgantown when we heard about this event. We wanted to acknowledge and honor these victims, while supporting those who strive to ensure that their memory will not be lost. 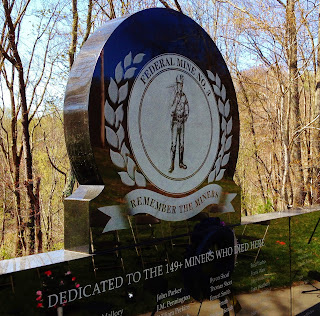 [This story appeared in the June 2014 issue of Two-Lane Livin' magazine.]
Posted by WVrambler at 9:38 PM