A Railway Getaway in WVA

Some of you may recall the news stories last October about a logging truck which crashed into an excursion train at the railroad crossing on U.S. Route 250 in Randolph County. We had ridden that train not long before this unfortunate incident, and we had a wonderful day. Although the remaining trips in 2013 were cancelled after the accident, I’m pleased to see that Mountain Rail Adventures (www.mountainrailwv.com) will resume these excursion trips in 2014. This journey is a wonderful way to see some of West Virginia’s natural beauty.

They offer a variety of train trips, but we chose the 9 hour, 125 mile round trip—the longest one offered. It runs to the site of the abandoned logging and railroad town of Spruce, which was once the highest altitude city in the eastern United States. A lumber mill employing hundreds of men operated there from 1905 to 1925, but after it closed, the town declined and eventually disappeared.

The train starts from the historic Elkins train station (with very interesting displays inside) at 9:00 AM. We were pulled by an old-style 1951 diesel locomotive, while riding in Pullman passenger cars that were even older. The train left the Tygart Valley River watershed and entered the Cheat watershed by taking a narrow S-curve tunnel under Cheat Mountain. Soon we were following the Shavers Fork of the Cheat River (renowned as one of our best trout fishing streams), rarely leaving its side for the rest of the trip. I loved seeing the freeflowing whitewater of this river for most of the day. 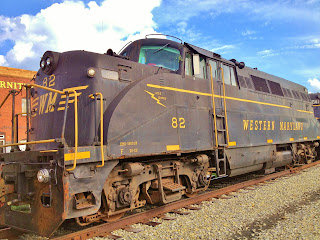 After crossing a bridge to the other side of the river, the train made a stop at the “High Falls of the Cheat.” A trail leads down the steep bank and through a laurel thicket to an observation deck, while other trails allow the more adventurous travelers to explore the rocky shoreline above and below the falls. The “High Falls of the Cheat” are only listed as 18 feet tall, but they are still impressive. I love the sound and scenery of a majestic mountain waterfall! 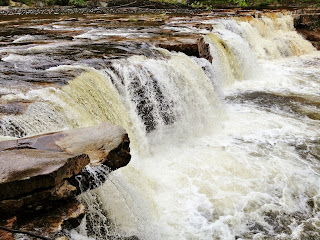 One of the best parts of the whole trip was the simple reality of old-fashioned train travel—the rhythmic swaying of the passenger car, the clickity-clack of the railroad tracks, and the constant forward momentum as the world passed by our windows. The landscape we saw that day was beautiful—tall spruce forests, deep laurel thickets, and lush fern gullies, all in a various shades of green. There were lots of wildflowers along the way, in a wide spectrum of colors. The sky was a deep azure blue, with puffy white clouds. The grayish-brown rounded stones along the river helped create the bubbling whitewater as Shavers Fork descended from the high mountains. 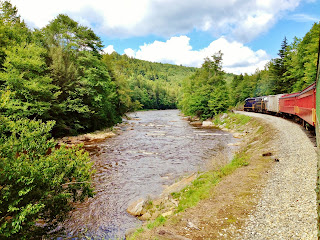 Most of this remarkable day was spent watching mile after mile of pristine West Virginia mountain wilderness go by me, while enjoying the unique sensations of train travel. It was a great trip, and I highly recommend it to others. 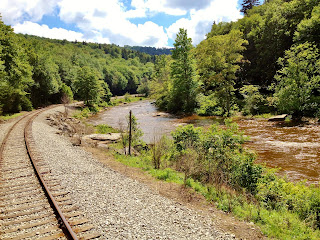 Posted by WVrambler at 9:16 AM