I came, I climbed, I conquered

A few years back, I had picked up a brochure somewhere while traveling West Virginia for the Nelson Rock’s Via Ferrata. I realized that “via ferrata” is Italian for “by way of iron.” The Italians had installed iron rungs in the steep sections of the Alps to better move their armies across the mountains. In Europe, many other via ferratas were built, and have become a popular form of recreation, but only a handful exist in North America. Fortunately, one of them is in my home state.

Nelson Rocks (http://www.nelsonrocks.org) is an unusual geological feature a few miles south of West Virginia’s better known Seneca Rocks. They were both formed by the same vein of rock, but unlike the huge single vertical cliff at Seneca Rocks, Nelson Rocks has split into two thin sections which look like a tall dorsal fin of a fish or dinosaur. The owners installed a series of metal rungs and safety cable allowing inexperienced rock climbers to traverse the sheer cliffs. Just to add to the fun, they built a 250 foot long swinging bridge, complete with 2x4 wooden slats spaced 18 inches apart, allowing a person to see the ground that is 150 feet below with every step (plus fewer boards mean less weight and wind resistance).

I’ve always enjoyed trying different forms of recreation, and have frequently regaled my blog readers with stories of my hiking, biking, motorcycling, rafting, kayaking, etc. However, when the rock climbing craze began to gain steam a decade (or more) ago, I thought I was probably too old, too heavy, too weak in the arms, and too afraid of heights to get into it. I’d tried a few of those fancy climbing walls, but didn’t feel very confident about my capabilities. Plus, the glass flooring at the Sears Tower in Chicago and the CN Tower in Toronto had really messed with my head (although I eventually walked on them).

However, I was intrigued by the Nelson Rocks Via Ferrata brochure and website (especially after surviving the BridgeWalk over the New River Gorge earlier this summer). They emphasized their safety precautions, beginning with the fact that you are always clipped onto the safety cable. They mentioned that leg strength was more important than arm strength. Their guides are highly experienced. They even provide several safe escape routes in case you get up there and find it too intimidating to continue. I decided to give it a try, but my first attempt was rained out (however I still had fun that day—see my story at http://inquisineer.blogspot.com/2012/07/the-heights-and-depths-named-seneca.html). I was able to reschedule for September 21, the last full day of summer—it would be a grand adventure as a capstone for my summer season. It turned out to be a beautiful blue sky day, with a few of the trees in the upper elevations beginning to show the first signs of autumn colors. Gatan Waddell would be my guide, and he got me set up with the safety harness and a helmet. Soon we were hiking up to the base of the rocks.

We began our journey in the shade of the western side of the formation. Gatan was very helpful in coaching me through the process. I knew I had to focus on my handholds and footholds, and especially the double clipping process so that I would always be connected to the safety cable. By concentrating so much on the task at hand, I was able to avoid looking down as we scaled the vertical wall. Soon we were out of the shade and into the sunlight as we arrived at the notch that allowed us to begin moving laterally across the inside of the western wall. The view at the first notch was amazing! I realized that we had begun the day on an ordinary hiking path that had come to a dead stop at the base of a sheer rock cliff. Mother Nature had placed a seemingly insurmountable obstacle in the path, but mankind had found a way to climb over it, and for that accomplishment we were rewarded with an absolutely incredible view. However, this was just the first of many phenomenal views that day. [Look at my feet on the rung in this picture, with nothing but a sheer vertical wall below me.] 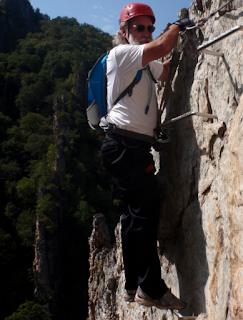 Soon we were at the bridge, where we took a brief lunch break. I don’t really consider myself a daredevil, and I knew that this entire via ferrata experience would be a significant personal challenge for me. However, I also knew that confronting one’s fears and then coming out the victor on the other side provides a strong feeling of euphoria—a personal accomplishment that will stay with you the rest of your life. In thinking about the trip prior to arriving (and believe me, I did a lot of “mental visioning” about this adventure), I knew the bridge would be challenging, but I had to try it. As I got started, I tried to focus on each individual board, and on my shoe landing on each board. By focusing one’s vision so hard on that particular point, it was easier to ignore the rocks and treetops below. I was a bit nervous, but very glad when I made it to the eastern wall! 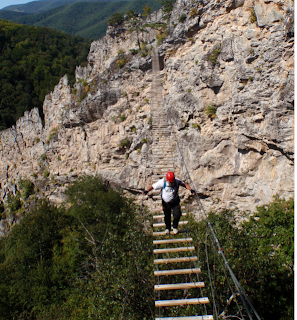 We were quickly climbing vertically again, ever higher up the wall, before crossing another notch to the outer side of the eastern wall. Eventually we came to the optional climb to a stunning view from one of the highest points. Before I had arrived, I had studied the website and read some other accounts so I knew about this option. It is the most challenging part of the adventure, but the view is breathtaking. Since Gatan had expressed how well I was doing, I decided to go for it. I had to climb straight up for quite a distance, sit for awhile on a narrow perch atop the “fin,” and then—for the first time—contend with climbing down a sheer cliff (which requires mostly looking down rather than looking up). I am very glad I took the challenge—it was incredible! [Notice how far down the bridge is in the picture below.] 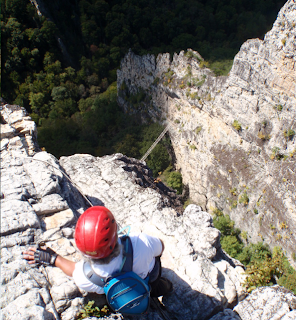 After that, the rest of the trip was comparatively tame, although you still have an awesome view of the surrounding countryside. One of the things I realized about this climb was how much I enjoyed the mental challenge, beyond just confronting a healthy fear of heights. Rock climbing turns out to be a very mental sport, as you play a “chess game” of sorts, trying to figure out where best to place your hands and feet as you scale the mountain. The metal rungs are not all conveniently placed and numbered for you to follow—sometimes you must use cracks or small ledges on the rock, or reposition yourself to take whatever path works best for your personal dimensions. Plus, there is the incessant need to carefully move your carabiners to the next section of safety cable. By concentrating so hard on what you are doing, it is easy to forget how high up you are.

Eventually, the fins merge with the mountaintop, where you get back on solid ground. A short hike further takes one to the very pinnacle of the mountain, where you can stand on a rock and get a 360 degree view of the North Fork valley as well as nearby Spruce Knob (the highest point in West Virginia). It is easy to discern the spine of rock that forms Seneca Rocks and Nelson Rocks as it stretches for miles up and down the valley. Standing at the peak—literally on top of the world—was a great place to end a great day.

I am so glad that I gave this one-of-a-kind West Virginia experience a try—indeed, I guess in some respects, I am truly a mountaineer now. It is easy stay on the couch, but the rewards of getting out there and trying something new are immense. I will never forget the unique perspective on the world that one gets from this experience. The memories of this personal achievement will live in my mind forever. I conquered the Via Ferrata! [And if a novice, overweight, old guy like me can overcome his “concern” about heights and do this, then many others can, too!]

Posted by WVrambler at 7:56 PM